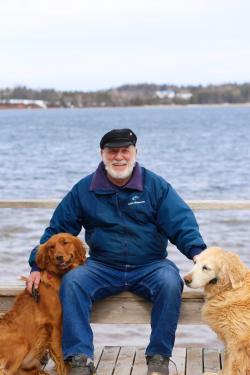 Private Family Funeral service will take place on Monday, June 29, 2020 at 11am In St. Jame's Catholic Church, Georgetown. The church will livestream the funeral and to watch, you go to their website

He was a teller of stories. A fixer of hearts. And a saver of souls.

It is with broken hearts that we announce the sudden passing of Paul Edward Batchilder, the Mayor of Morrison’s Beach, in his 80th year.

Paul was born and raised in Georgetown where he spent most of his life as a legendary renaissance man and was a proud veteran of the Royal Canadian Navy. After returning from service he ran the Post Office for 30 years, served as Fire Chief and as a Town Councillor along with operating the St. John Ambulance First Aid Post, "doing up the income taxes" for many, serving as an auxiliary member of the RCMP and always having time for a good story and a cup of tea "with just a squirt of milk." Those who shared a cup of tea with him were well aware that he might tap you with that hot spoon at any second "just to keep you on your toes."


He was the proprietor of Four Seasons Cottages at Morrison’s Beach for 40 years and it was there that he was often seen changing propane tanks or on the beach with his many beloved dogs over the years.


Paul lived a life of profound service and was well-known for having a door that was always open to friends and strangers from around the world. He was an advocate for those in need and lived his deep faith in every moment.


"Waste no more time arguing about what a good man should be. Be one."

Private family visiting was held. Due to Covid-19, time and date of services to be announced.

Please go to our website www.fergusonlogan.com to send condolences.

Donations in Paul's memory may be made online to  Georgetown Fire & Rescue or the Kings' Playhouse".