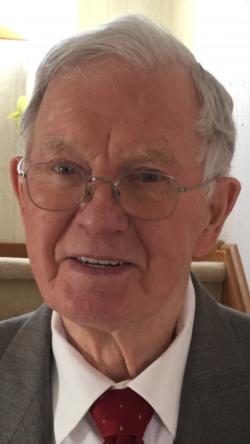 The Family of Lawrence Harvey Van Buskirk of Toronto, Ontario is heartbroken to announce his passing on Good Friday at the age of 87. Lawrence passed at his home in Queens Estate Retirement Residence. The family is greatly saddened that we could not be there as he gained his Angel Wings.

Lawrence was born and grew up in the family home at Valleyfield, Prince Edward Island. Growing up, Lawrence enjoyed Young Peoples Group, Square Dancing and working with animals, especially horses as he had a knack with them. He worked with Fishermen, Farmers and assisted his dad with providing ice to customers by cutting blocks of ice from the river by hand.

Lawrence moved to Toronto to find fulltime work as many Islanders did back in the day. He found work in the Transport Industry and was a proud lifetime member of Teamsters Local 938 for 37.5 years, retiring in 1991. Lawrence saw his teamster buddies regularly at The Teamster Retirees meetings until his health prevented attendance.

More importantly, after moving to Toronto, Lawrence met a beautiful young lady; Eileen. As they learned about each other they realized that they grew up a hop, skip and a jump from each other on PEI.

Eileen grew up in Orwell Corner and Lawrence in Valleyfield, PEI only 10 minutes apart by car today, but it took a chance meeting in Toronto for them to find each other.) Love blossomed and Marriage naturally followed on August 15, 1959. Over 60 years together!

They built a home and a life in Toronto raising Sandi and Mark where Sunday afternoon naps and quiet time became a gathering place for all of Sandi’s and Mark's friends. However, "The Island" was always in their hearts and they made annual camping  trips by car and tent trailer Back Home to keep Islander Family and friends close.

Lawrence had a passion for Steam Engines, older cars, tinkering with motors and repairing anything mechanical. Throughout his life Lawrence was part Tim the Tool Man Taylor, Red Green and MacGyver-he had a flare for repairing pretty much anything and helping anyone fix stuff. He enjoyed collecting farm and tool antiques and other interesting things of value only to someone who grew up during WWII.

Lawrence was a generous man with a positive outlook. He offered his time freely to the United Church and was always willing to help a friend in need. He passed his unique way of spreading joy and spirit of service to his children. Lawrence was a deeply involved Dad. He supported his children by going with his kids to every event with Guiding, Scouts, baseball, hockey, rugby, football, church activities, church youth activities, school projects, school sports, camps, chauffeur to dances and parties and activities or commitments each of them were involved in. Lawrence never missed a teacher’s conference or family event or activity for either of his children.

Family meant Everything to Lawrence. He showed his love by his unwavering support of each child and especially Eileen.

Lawrence loved Eileen steadfastly and deeply and they were together every day of their marriage other than for a couple of unavoidable short trips and the final weeks that they were separated by the pandemic.

Lawrence was truly a gentleman, the most generous , kindest and most loving soul. He will be missed by many and will forever be in our hearts.

We are blessed to have known you.

Lawrence will be buried in Valleyfield Cemetery, Valleyfield PEI.
A Celebration of Life will be held at a later date.

Condolences to the family may be made at www.fergusonlogan.com.
In Lieu of Flowers, memorial donations may be made to