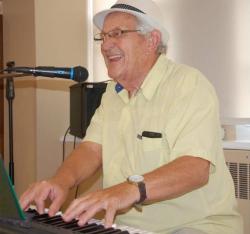 Con and his new wife Jet/Jean immigrated to Canada in 1955 joining the Royal Canadian Dragoon (RCD) Military Band in Camp Borden Ontario. He honed his music skills with military deployment to Germany and the Middle East, Gaza Strip, before coming back to Canada and settling in Oromocto NB in 1962. In 1964 he left army life to continue his musical career as a civilian, taking a job as musical director at the Cathedral in Saint John. In 1967 the Zaat family moved to Montague PEI where Con began his teaching career. Con’s musical mastery contributed to music education in many Island schools over the years. He was also a prolific entertainer  performing in bands and alone at weddings, dances, lobster suppers, mass, and many parties with great friends. Once retired Con continued sharing his musical gifts, directing choirs, volunteering at the Alzheimer’s Society, and entertaining at manors and nursing homes all over PEI. His final years were spent back in Saint John. There he continued to play music with his talented sons, at senior homes and at Parkland Saint John where he lived.

He was well Loved. He will be well missed.

When conditions permit a celebration of life will be held in a manner consistent with Con's life. Family, friends, music, stories and love will all be shared. We hope to see you there. Ferguson Logan Montague Funeral Home entrusted with the arrangements. Online condolences may be made through the website.