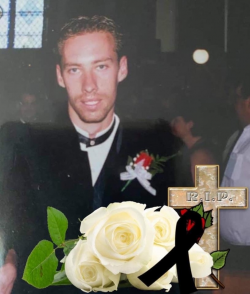 The family of "Jody" Newman James Llewellyn, aged 44, announces his very sudden and unexpected passing at home. Jody is the cherished son of Roxanne and the late Garry Llewellyn of Georgetown, PEI.  Much missed brother of Tonya Llewellyn and Tammy (Frankie) Stevenson. Jody will be dearly missed by his sons, Dwight and Garry, as well as his nieces and nephews, Dakota and Dustin Llewellyn and Blake, Alexis, Carson, and Teyjah Stevenson and great nephew Nathan Stevenson. He was very much like his father and was very devoted to his family. Family are all shocked as Jody was never sick.


He is the dear nephew of Doreen and Joe Shepard, Cardigan, PE and Glen and Gertie Llewellyn, Primrose, PE, Blair Acorn of Georgetown, PE, Cyril Cashin of Guysborough, NS and Christine McGee of Stirling, ON. Many cousins and their families mourn his passing, including Charlene (Brian) Somers, Greg (Leanne) Shepard, Dwayne (Marlene) Llewellyn, Mandy (Craig MacDonald) and Nathan Acorn (all of PEI), and Ashley (Mark) Turgeon, Brittney (Jeff) Preston, and Stephen Reid (ON). he will be missed by friend Keith Elliott and family of Trinidad and Tobago. Numerous other Ontario family will also share in our devastating loss.


Jody has gone on to be reunited with his family who have kept his space in heaven ready for him.  He was the cherished grandson of Bill and Phyllis Llewellyn (PEI) and Robert Cook and Betty Sargent (ON). He was also predeceased by his aunt Debbie (Acorn) Llewellyn, aunt Donna Cashin and her son, Brian, cousins Lorrie Shepard and her daughter Melina, uncle Bobby Cook and many Ontario family.


Jody was the youngest of a family of three children. He grew up in Georgetown and attended both Georgetown Elementary and Montague Regional High school and later achieved both Plumbing and Welding Certifications at Holland College. He overcame so much in his younger years and grew to be a very strong, young man; skills he would later need in life.


The best thing to come of his marriage to Eleana Blackett were his two sons, Dwight and Garry.  He continued to battle life’s challenges to be a very involved father to these two boys.  They, and his nieces and nephews, were his whole world. He was a man of few words, but was liked by many.  He has a wonderful group of friends who have offered their love and support to the boys who will try to fish his gear and carry on his love for fishing and the outdoors. Jody is also missed by his beloved four legged family members whom he spoiled with regular treats, Bella, Sassy, and Baby.

Online condolences made be made through the Funeral Home website at www.fergusonlogan.com, to view Live stream, go to Jody's obituary, click gray box at 1:55 pm.