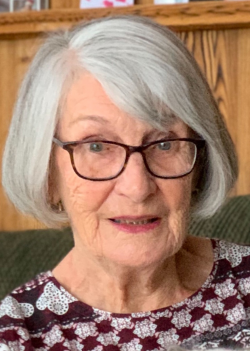 It is with deep sorrow and much love that we mourn the passing of Wilma Catherine Clements (nee MacLure), aged 88 years of Montague, PE, at the Saint John Regional Hospital on Monday, November 15, 2021.

Wilma was the devoted and loving wife of the late Gilbert Ralph Clements. She was dearly loved by her three children Robert (Winnifred) Clements, David Clements and Gail (Brian) MacDonald and by her dear brother, Errol "Dusty" (Pat) MacLure. Nanny will be greatly missed by her cherished grandchildren Julie (Sean), Mary (Gabe), Steven, Haley (Travis), Jayda, Meaghan (John) and Scott and by her adored great grandchildren Alice and Henry, Everett, Blair, Preston and Leiland.

Wilma was born in her hometown of Montague, PE, on August 10, 1933 to the late Benjamin and Mary "Mamie" (MacKinnon) MacLure. Wilma and Gilbert were married in 1953. Wilma loved travelling and meeting people throughout Gilbert’s political career. She was a true social butterfly and loved connecting with others whether it was a coffee at Aileen’s or in later years lunch with the girls. She was warm, welcoming and a good friend to many. Wilma enjoyed entertaining and a good meal, especially one shared by family. She loved summers at the cottage, being with the grandchildren and all the extended family. She always kept up with all members and had an impeccable and unbelievably detailed memory for significant milestones of each and every person.

A private service for the immediate family will take place in the Ferguson Logan Montague Funeral Home Chapel.

In lieu of flowers, donations to the Heart and Stroke Foundation or another charity of your choice would be greatly appreciated. Donations and condolences to the family may be made online through www.fergusonlogan.com.

To view Funeral click on Wilma's Obituary, and in middle of page, click the square button that says watch Funeral Live Now on Sunday at 3:00 pm.