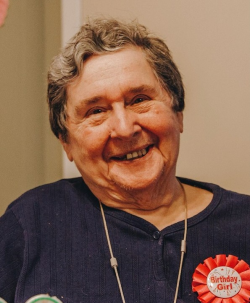 Veda Elizabeth Wilson (nee Allen) passed away surrounded by family on Sunday, January 16th at Kings County Memorial Hospital at the age of 91.

She is predeceased by her husband, Danny Wilson Sr., and her beloved daughter, Guelda MacDonald. Veda was a loving and devoted mother and grammie and will forever be remembered by her three sons, Dwain (Sharon), Ricky and Danny, as well as her seven grandchildren; Travis, Tracy, Rebecca, Susan, Megan, James, and Justin, and four great grandchildren; Samantha, Alexander, Nora and Elizabeth.

A long time member of the Montague Church of Christ, Veda was known for her kindness and her warm and accepting personality. She will be dearly missed by her family, many friends and members of her community.

She is now reunited with her husband and daughter, and will be laid to rest in her hometown of Montague at a later date.

A private funeral service will be held at the Ferguson-Logan Montague Funeral Home on Sunday, January 23, 2022. In lieu of flowers, the family has requested donations be made to the MS Society of Canada or Maritime Christian College in her memory.