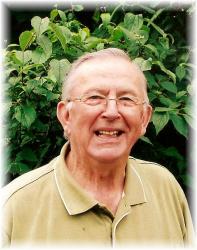 Peacefully at the Kings County Memorial Hospital with family by his side, the passing of Dr. Albert Bud Ings age 89 of Montague, devoted husband to the late Constance (Connie) Margaret (Mair) Ings, occurred on Friday, March 20, 2015. Born in Mt. Herbert on February 5, 1926, he was the son of the late Earle and Evelyn (Rackham) Ings. Bud is survived by his loving daughters, Jeanne Ings Robertson (Don), Joanne Ings (Anne Crosby), Jayne Ings; two cherished granddaughters Lauren and Miranda; sisters Eileen Tansky, Lillian Robertson (Roy); brother Harley Ings (Anna); brother-in-law Colin Mair; special friends Marilyn and Stephen Hicken and families; numerous cousins, nieces and nephews. Bud was predeceased by a son Albert Allen at infancy; sisters Annabelle, Miriam and Doris. Bud was born and grew up on the family farm in Mt. Herbert, PE, and from an early age saw a need for professional veterinary care. After completing his basic training in the second World War, he completed his education at Prince of Wales College, Charlottetown, and Ontario Veterinary College, Guelph, Ontario, graduating in 1952. He began his veterinary practice in Fortune, PE, moving to Montague in 1954. He established Montague Veterinary Clinic in 1967, and Brudenell Animal Hospital in 1990. Bud always credited much of his early success in practice to his beloved Volkswagen Beetle, which faithfully took him over the red roads of Kings County. In 1970 he was elected in the Alex Campbell government as MLA for 3rd Kings, and again in 1974, becoming Minister of Agriculture, and Minister of Health and Social Services in 1978. He became President of the PE Liberal Party in the early 1980’s. Bud was very proud to have contributed to the establishment of the Atlantic Veterinary College, and the Queen Elizabeth Hospital. Bud was also a charter member of the Garden of the Gulf Museum, Montague Rotary Club, and was a Rotary Paul Harris Fellow, and Mentor Award recipient. He served on Montague Town Council, and as a member on many other community boards. He was a proud member of Montague Legion Branch #8. Bud shared his love of music as a member of Hillcrest United Church Choir, Montague Male 8 Chorus, the Venerables senior drama group, and was a lifetime member of the Queens County Fiddlers. He sang at countless funerals and community concerts. An avid photographer, he spent many hours documenting the landscape of his community. In his retirement he wrote two award winning books documenting his veterinary career, and was the proud recipient of many awards including the Eugene Whalen Green Hat Award, Atlantic Award of Excellence In Veterinary Medicine, Inductee Atlantic Agriculture Hall of Fame, and was most proud to be awarded the Order of PE in 2012. Apart from his veterinary and political career, his greatest accomplishment was that of husband, father, and grandfather. He will be greatly missed, not only by his family, but by all who knew and loved him.

A celebration of Bud’s life will be held on Friday, March 27, 2015 at 2:00 pm, from the Ferguson Logan Montague Funeral Home Chapel. No visitation by family request. Interment to take place in St. David’s Cemetery, Georgetown, at a later date. In lieu of flowers, donations to the Companion Animal Trust Fund at the Atlantic Veterinary College, Hillcrest United Church or a Charity of choice would be appreciated. Royal Canadian Legion Branch # 8 will hold a Tribute Service on Friday at 2:00 pm.

Funeral Service will be streamed live here on the Ferguson Logan Montague Funeral Home Website at 1:55 pm. Just click the Video camera on the left hand side at the time of Funeral.